Recently I have been experimenting with creating personal prototypes of small press objects. Each of my experiments have been mostly oriented around illustrator Lauren Stringer’s guide on making a six page book with a piece of A4 paper. In my first small press experiment, I made a six page book called “Obsessions”. While handling this object, I noticed that each physical page of the book was made of a folded page rather than a single sheet. Having used thick, hardy paper for this prototype, it felt like quite a waste of space, so I made an attempt at innovating the form by folding the paper, with mixed results. 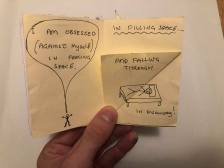 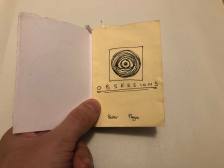 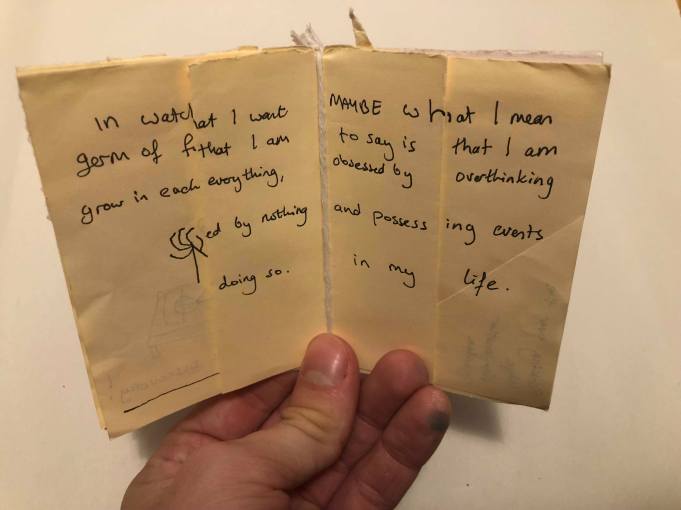 I bound the collection together using a crude piece of string, which meant that the object would never close properly. I used a piece of Daler & Rowney heavyweight fine grain card for the outer cover. The texture of the card is subtle, and pleasing to the eye – the minuscule gaps in the fine grain look like light imperfections on a sheet of bone coloured clay. Alongside the vellum – coloured paper, the object had an altogether quite rustic feel to hold and leaf through. But, having been made from thick paper folded to 1/8th of its original size, it did not feel particularly elegant, especially alongside the crude tear marks.

In my second experiment, I created a book similar to the first, but instead with twice as many pages. To achieve this, I folded two 6-page books, and put one inside the other, using the same fine grain heavyweight card as a protective cover. Instead of the thick yellowed paper in Obsessions, I used generic white printer paper. To bind the book together, I ran a blanket stitch down the spine of the book. This left a wholly different impression on the object as a whole. 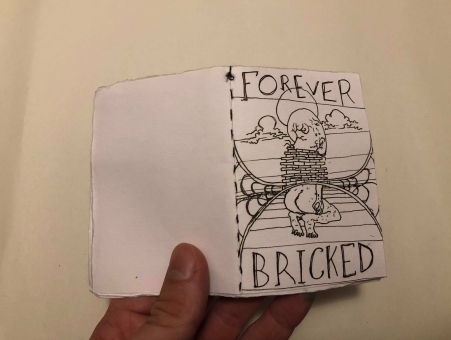 In this booklet, I tried tearing some of the folded pages into single sheets, with devastating results. The compromising pages were re-attached using black insulating tape. The only four illustrated pages of the book were those most affected by the crisis. The blanket stitch down the spine, although effective, is much too tight. Over time, this tightness will naturally give way to wear and tear. Although wear is inevitable, I realized that it would be noble to give each object the best chance possible against decay. This book suffered worse for an issue raised in the production of Obsessions – it did not feel elegant. In fact, it suffered from the worst minibook muffin top out of all three of the texts produced, in spite of the radical page folds and rustic binding of Obsessions. I put this down to the tight binding, and overflow of pages. One of my friends, an informal reviewer, also enlightened me on the phallic imagery on the front cover. I denied it as having any overarching importance, abandoned the book, then started thinking of how I could improve the evident problems in a third production.

For my third, and (for this post) final small press object, I took inspiration from Parting, by Thomas A Clark (Moschatel Press, 2004). I was mainly inspired by the delicate binding, and the dimensions of the book. It felt much unlike the two I had already produced – it was delicate, but not malfunctional. It demanded tender attention and physical reservation. Handling the object, I was reminded of Alan Dubin’s augur in his lyrics for Wings from Spine by Khanate. 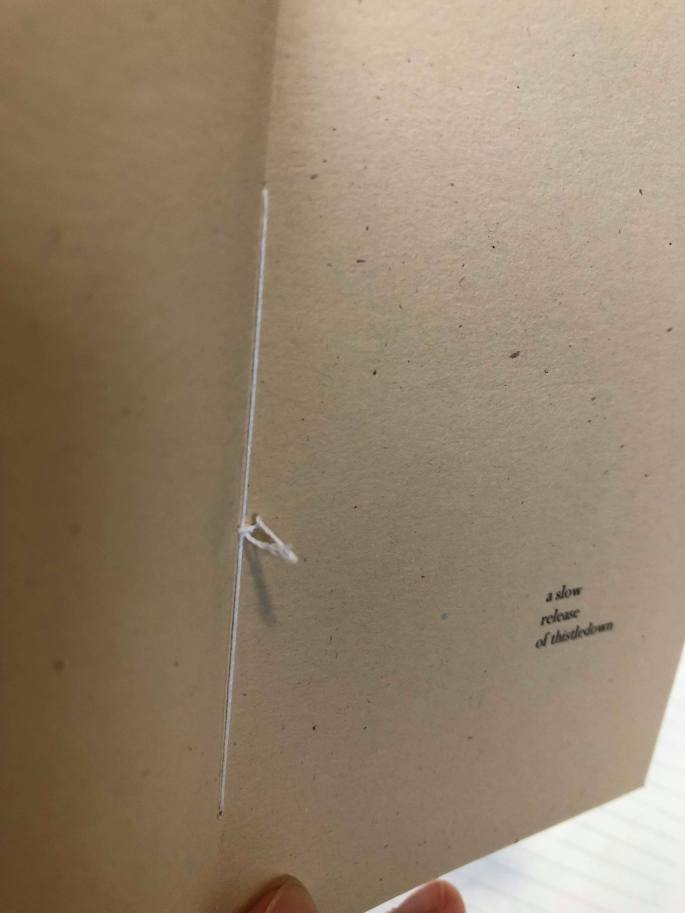 Unlike the two crude, nomadic objects I had previously produced, this booklet had emotional fragility built into itself. The poetry, as if aware of its bindings, used them to its advantage with great results. Inspired by Parting, I created Through the Roller. I used a similar (although not identical) binding technique, using black thread rather than white. I used much thinner paper to construct the usual 6-page booklet, allowing for more freedom of space. This thinner paper had a much more pleasing texture than that used in the former two booklets, and seemed to work for the folded page rather than against. 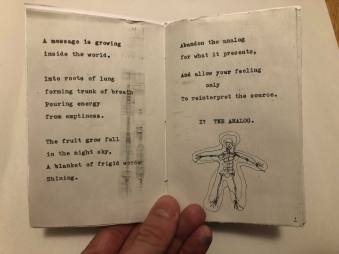 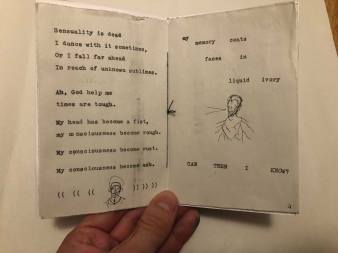 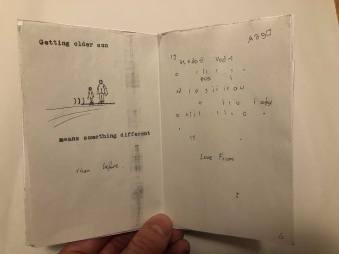 The alternate paper took very politely to illustrations. My anticipation of the final product encouraged a more emotionally sensitive approach to my writing, as can be seen through the progression of the piece. To begin, I was keen and eager to address some big and grandiose message. But by the end, I lapsed into a softer character, reflecting on their present. It took no longer than 30 minutes to make the object. If I were to predict my endurance, I feel I would be able to make a run of 30 original copies of Through the Roller, featuring one-of-a-kind illustrations and original type-written poetry. If I were to sell it, I would advertise the sensuality of the paper, the binding, and the bone-clay cover. It is a promising idea.